Numerous guests of Food Tour In Delhi have written about their experience of the Delhi tour in their websites, TripAdvisor, Facebook pages  and so on. Here are some of the testimonials from various such platforms.

Food Tour In Delhi On Her World Magazine

After some toing and froing between our guides we met up with Rajeev and JD from Food Tour in Delhi at about 3.00pm.  Exuberant Rajeev and the quieter JD were to lead us through the most extraordinary NINE hour food adventure through some of the oldest (and scariest) parts of Delhi, introducing us to some of the most authentic food tastes and experiences we could never imagine. It’s now almost 24 hours after we concluded the tour and no gastric upsets yet – so it proved to be a completely successful food experience in every sense!! 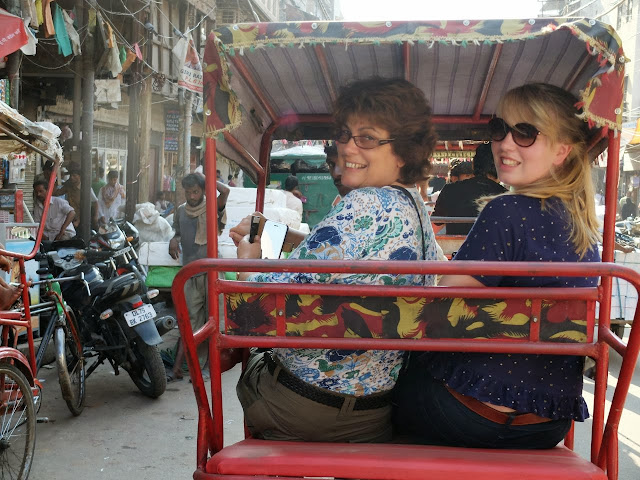 A food tour of Delhi starting in rikshaw

We set off in rickshaws through the crowded, gridlocked streets and laneways of heritage listed Old Delhi.

While planning for our trip to India, we came across the very highly recommended Indian Food Tours in Delhi and thought it sounded like a great way to experience the many and varied cuisines available in Delhi.

We went in with very high expectations of the tour after reading the numerous excellent reviews on TripAdvisor (they are ranked #3 on TripAdvisor’s list of activities to do in Delhi), and it certainly didn’t disappoint!

Upon picking us up from our hotel, our guide for the day – Mr Rajeev Goyal (Raj), a chef, restaurant owner and culinary expert – informed us that he liked to approach these tours as if he was showing some friends around town, though he would be a “bad friend” as we would be paying him at the end.  Rather than being “bad friends” it felt more like Raj & his business parter Jaidev (or ‘JD’) were old friends who took great pride in showing us the sights and sharing with us the many different foods available in their amazing city.

The chaos of the streets of Old Delhi is truly a sight to behold. Cycle-rickshaws, motorbikes and people weave in and out of the traffic, yet we didn’t see a single accident while we were there.

All of the food tours run by Indian Food Tours in Delhi are customised for each tour group and no two tours are the same.  And so, as we were driving to our first destination in Old Delhi, Raj asked us many questions about our Indian food knowledge, whether we had any allergies (my wife is gluten intolerant, and Raj took this into consideration when ordering), what our favourite Indian foods were, and what our tolerance for chilli was like, all of which informed his decisions about where to go and what to order on our tour.

Punctuated by stops at street food vendors along the way, the walk through Old Delhi gave us an insight into that part of Delhi that we would never otherwise have been able to obtain on our own.  Raj’s home ground advantage (having grown up in Old Delhi) was invaluable, and the significant research he has done on each vendor over the years ensured that all of the food we ate was delicious and clean.

Harry en Gea Zuiderent, Holland
A visit to India often starts in Delhi, en when you have been there more often, you know all the highlights more or less. This time however we had the opportunity to make a Crazy Food Tour through old Delhi and that seemed fun to us.
Around 4 o’clock (a little later than planned due to circumstances) we were collected by car from our hotel and driven to the old part of the town. There we took a bicycle rickshaw and after a while we walked, with our guide, through small and busy streets. (picture 1). Immersed by claxons, jingles, loud voices. Scents and colours. Overwhelming.

The first stop we got different kind of food in trays by an open stall along the street. From each tray we were allowed to take two or three bites, because there was more to come. A lot more.  A pity, because it tasted delicious. From a clay pot we drank the most wonderful “Lassi” ever! (picture 2). We went on. In a back street, where we could sit for a while, we got (picture 3), a sandwich  with cheese and  mango fruit on it, very special.  A stand on the street (picture 4) with a big bowl of white stuff and some yellow spots. The yellow was saffron the white stuff whipped cream. In Delhi (on the street anyway) it is only possible to make this 2 month a year, otherwise it is too hot, told our guide.  Mmmmm, marvellous, there must have been some more spices in it too. A little further on was a man baking cookies. Crispy, warm and a little spicy (picture 5). We got a bag full for the day after.
On the way we regulary got explanation about how things worked, or were made and also about het things we saw around us.
In the “office” from an ice manufactorer (picture 6 and 6a)we could sit and had to wait untill some ice came from the factory (picture 6b). The ice was handmade and was also sent to the most expensive hotels in the town. Divine! The owner preferred this place as his office instead of a modern office in the business district of Delhi. Since we had got some idea of the special athmosphere in this old part of Delhi, we could understand this decision. We went on again, partly by rickshaw to the spice market (picture 7). With lots of peppers (picture 7a). We got a moist cloth for our nose and mouth (picture 7b) and that was not without reason! Next stop we made by Wengers Pastry (picture 8), at Connaught Place. Famous for its delicious pastries (picture 8a). Round the corner we got a bottle of home made  mangodrink (picture 9), never before tasted so delicious!
Part of the tour was a visit to the kitchens of the Gurdwara tempel, a Sikh tempel, where daily thousands of meals are prepared for who wants to have it. Free. Prepared by volunteers. Since we had visited the kitchen before, we only made some pictures of the beautiful tempel in the floodlight (picture 10).
Then it was time to eat Kebab (picture 11). This kebab, our guide told us, need no chewing, it melts on your tongue. The owner had developed this kebab, with more than 50 spices in it (!), because his wife was unable to chew. And it was true, the meat melted on your tongue, and it begins to be monotonous, but, it tasted delicious.  Just on the street (picture 12).
Our stomachs started to be  fullfilled, but still we were not at the end. There was a “diner” at a take away  shop (picture 13). Served up the bonnet of the car (picture 14).  The orders for the popular food  came in by phone constantly. The orders were delivered, but after 9.30 the phone stayed unanswered. They could not cope with more orders. The staff inside was so large that the “roti”maker had to do his job outside (movy).
Back to the hotel the guide and his earlier arrived compagnon tol dus that they have had one year of research. To look for the best and safe quality. The tour has a starting time, but no ending time. That depends on the joy of the customers. We arrived at 10.30 at our hotel. Tired, but very, very satisfied. We have eaten things on places, we had not dreamed of to take one little bit before. And I dare to say it was the most fantastic experience we have ever had in Delhi. And no problems afterwards! For the Crazy Food Tour we’d like to come back to Delhi once more!